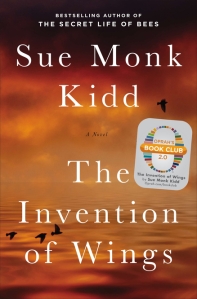 I actually read The Invention of Wings a couple weeks ago, but I got so distracted by the Robert Galbraith novels (and three jobs, and a weekend of moving Matt to Calgary, and the Calgary Stampede, and … excuses) that I didn’t get around to posting about it yet. But here we are, better late than never!

This is the latest offering from Sue Monk Kidd, and it has been very well received. It is a Heather’s Pick at Chapters/Indigo stores in Canada, and an Oprah’s Book Club 2.0 featured title as well. I really loved her book The Secret Life of Bees, which I read one summer when I was home from university, and I liked – didn’t love, but liked – The Mermaid Chair. So I was eager to pick up a copy of The Invention of Wings. Plus, I had read a brief write-up about it in a magazine – possibly Chatelaine – and I was intrigued.

The plot centres around two women – one white and one black – over 35 years in the early 19th century. On Sarah Grimke’s 11th birthday, she is horrified to be presented with her own slave – 10-year-old Handful. The story that follows – with each girl narrating alternating chapters – is a journey through the turbulent, racially-charged American South in the 1800s.

It’s a risk, as this great New York Times review notes, for a white, Southern writer (even in the 21st century) to take on the voice of a slave, but I think the chapters written in Handful’s voice are the strongest in the book. But this isn’t the only big issue Kidd tackles. The Invention of Wings also explores two very different mother-daughter relationships, feminist issues, religion, love and social justice inequalities.

All of these are ambitious topics on their own, so together, the book sometimes feels a little bit heavy. I was discussing it with my friend Erin this afternoon (she just finished it) and we agreed that we both had trouble at times with the uneven pacing. The beginning, where Sarah and Handful grow into young women together, is pacey and short – in fact, it’s over much too soon. The later chapters – where Sarah and her sister Angelina campaign for equality – are interesting and important, but lack the pace and punch of the early pages.

The character of Sarah is a fictionalized version of the real Sarah Grimke, and much of the later events of the book are based on Kidd’s meticulous research into her life. This might be why it feels like it drags a bit here – it is obvious that Kidd wanted to do this remarkable woman justice, and she probably had much more real-life detail to weave in from Sarah’s adult life than her childhood.

It’s a heavy read (because the subject matter is heavy), but I think the fact that I finished it two weeks ago and it’s still on my mind is a good sign. If you like Kidd’s work, or you’re interested in novels about race and the South (The Help springs to mind), you’ll want to give this one a try.